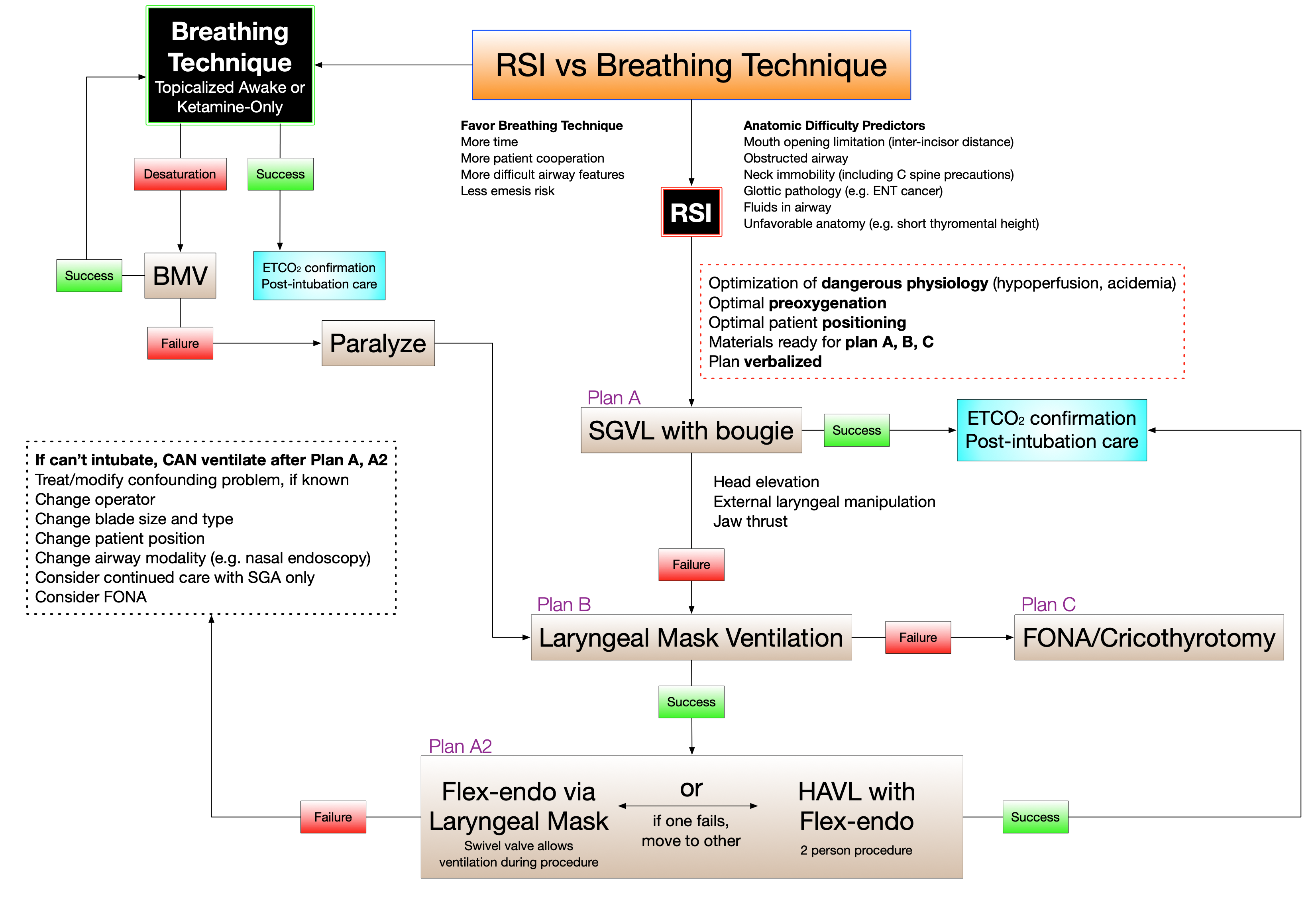 In the beginning, there was awake blind nasal tracheal intubation, a brutal and often unsuccessful technique that thankfully disappeared when non-anesthesiologists gained access to paralytics. The primary tool for emergency airway management then became the traditional laryngoscope, a device little improved since the 1940s, until the advent of video laryngoscopy in the early 2000s which changed everything.

The age of VL was ushered in by the 2001 Glidescope, which simultaneously introduced two technologies: video (putting a camera at the end of the blade and projecting the image onto a screen), and hyperangulated geometry (blades with a much steeper curve that are designed not to move the tongue out of the way, but to advance around the tongue). It took us a decade to figure out that video was a transformational advance, but not hyperangulated geometry, which is a trade-off compared to conventional standard geometry (Macintosh or Miller) blades. But because they were introduced together, in the same revolutionary device, another decade has passed and there is still much confusion about how these technologies fit together.

The hopefully over VL vs. DL debate

For many years, there was a raging debate about VL vs. DL, but this has become less relevant with the rise of VL systems that incorporate hot-swappable SG and HA blades, allowing providers to switch between HAVL and SGVL in seconds. Because you can perform DL using an SGVL blade in the same way you would perform TL, SGVL is direct and video, SGVL contains TL, and now that we can instantly flip between SGVL and HAVL, it has become obvious to most (I hope) that there is no longer a role for TL. I still see pockets of enthusiasm for the 1943 laryngoscope, but this seems to me usually a demonstration of machismo similar to how an aged cardiologist recently condescended to me for relying on ultrasound to diagnose tamponade. All airway providers must be competent in DL, but only because video is not always available.

The question now is which video blade to reach for. Practitioners who are highly skilled at either SGVL or HAVL will successfully intubate nearly everyone; both techniques are excellent.

HA blades produce an excellent view of the glottis almost every time with very little practice, and can get good views when SG blades can’t. This is a very important advantage, especially for folks who intubate infrequently, because seeing the cords calms you down, and you do a better job when you’re calm. HAVL requires less force, head/neck movement, and tissue displacement, which is an advantage in neck immobility, limited mouth opening, or an oral lesion that would bleed if disturbed. However, the fantastic view easily obtained with HAVL comes at the price of more difficult tube delivery, because the view from the camera points up, while the trachea points down. This can be overcome with maneuvers designed to flatten the angle between camera-view and trachea, but these maneuvers involve degrading your view, and are therefore against your instincts, and also don’t apply to SGVL or DL, where you want to optimize your view.

SGVL is quicker than HAVL, because tube delivery is (literally) straightforward, and this advantage is powerfully magnified by a bougie, which can be used with HAVL but is simpler with SG. Similarly, suction is easier to apply with an SG blade, and this can make a big difference in heavily soiled airways. The view-optimizing goals of SGVL are intuitive and work with your instincts, and the SGVL skillset applies directly to DL/TL, which is not true of HAVL.

The Era of Single-Use Flexible Endoscopy

Flexible endoscopes,  often called fiberoptic bronchoscopes, are immensely powerful airway tools that until recently have been available in a small minority of emergency settings, because the conventional devices are expensive, fragile, and require a sterilization process that often doesn’t fit into EM workflows. The development of single-use, disposable endoscopes has brought this technology downstairs, and these devices are now available from several vendors.

Most emergency providers have little experience with flexible endoscopy, but they are not hard to use and a reasonable degree of proficiency can be acquired in a single mannequin session. The gadgets are often referred to as fiberoptic, though most of them no longer use fiberoptic technology, and often referred to as bronchoscopes, though they are rarely used for bronchoscopy in the ED.

Their classic use is as a primary intubation modality using meticulous local anesthesia, in a patient who is fully or nearly fully awake, and breathing normally. Topicalized Awake Intubation (TAI) is a core skill for anesthesiology but not always easily applied to emergency practice because it requires time and some degree of patient cooperation, as well as materials and topicalization skills not always present. It is still a skill that should be taught and practiced in EM training, because it is the safest way to intubate patients with a high degree of known or predicted difficulty, and absolutely can be performed successfully in many emergency scenarios.  An alternative breathing intubation technique that provides some (not all) of the safety of TAI but is much easier to deploy in the ED is the use of dissociative dose ketamine without a paralytic (KOBI). More discussion around the merits and demerits of these two techniques can be found here and here.

Most ED patients, however, are (appropriately) intubated using a paralytic, and flexible endoscopy, now more available in the ED, is perhaps even more important as part of an RSI-based airway strategy.  Using an endoscope by itself (often through the nose) is the traditional way to execute TAI, and this can work well in other techniques where the patient continues to breathe (such as KOBI), but if used after a paralytic, flexible endoscopic intubation is best accomplished in combination with either a video laryngoscope (where you can go fast) or laryngeal mask (where you can continue to ventilate during the procedure).

I got my hands on a disposable flexible endoscope years ago and described an ED Double Setup that incorporates 2-provider video laryngoscopy + flexible endoscopy; a single-provider variation on this procedure using a channeled VL was published by Sowers & Kovacs.  Operating room-based case series and correspondence report on this “dynamic stylet” or “smart bougie” technique, and there is even an RCT.

SGVL or HAVL can be used, though the VL-flex endo technique uniquely leverages the strength of HAVL (obtaining the best view of the glottis) while addressing its key weakness (difficult tube delivery). If VL intubation is unsuccessful, a second operator slides in from the right wielding a flexible endoscope loaded with an endotracheal tube. The VL operator holds the best achievable view (left hand) and utilizes suction (right hand) as the FE operator advances the endoscope to the glottis and into the trachea viewing the mouth directly, then the VL screen, and finally the FE screen as needed.

Airway Strategy with Many Choices

Many modern emergency departments and ICUs have immediate access to VL with hot-swappable SG and HA blades in a variety of sizes, flexible endoscopy, and second generation laryngeal masks that are nearly foolproof to place and designed to easily transmit an ETT.  These new tools can work together in extremely powerful ways, and we haven’t properly updated our airway strategy to take advantage of this. Here is an example of a strategy that does.

The first step is to decide on paralysis vs. breathing; you’ll usually choose RSI, which is usually the right choice, but make sure you know when it isn’t the right choice and the alternatives.

When you’ve decided to move ahead with RSI, the next step is to slow down, think, and prepare for dangerous physiology, optimal oxygenation, and plans A, B, and C. Use a checklist.

Plan A is going to be HAVL or SGVL, and I recommend, unless you’re already excellent with HAVL, that your go-to approach should be SGVL with bougie. When combined with view-optimization maneuvers, you will rarely encounter an airway that cannot be intubated with SGVL+bougie.

When you do encounter such an airway, the best move is not bag-mask ventilation but laryngeal mask ventilation. We’ve known for many years that LMV is both easier to do and more likely to be successful than BMV, and this is even more true now with 2G supraglottics.

Once you have placed an intubating SGA and restored oxygenation, you can go for any Plan A2 you like, but you are now well positioned to intubate through the SGA using flexible endoscopy, which can be done as ventilation continues if you have a swivel adaptor. Alternatively, removing the SGA and performing HAVL will often be successful, especially if you can perform VL-Flex endo, as described above.