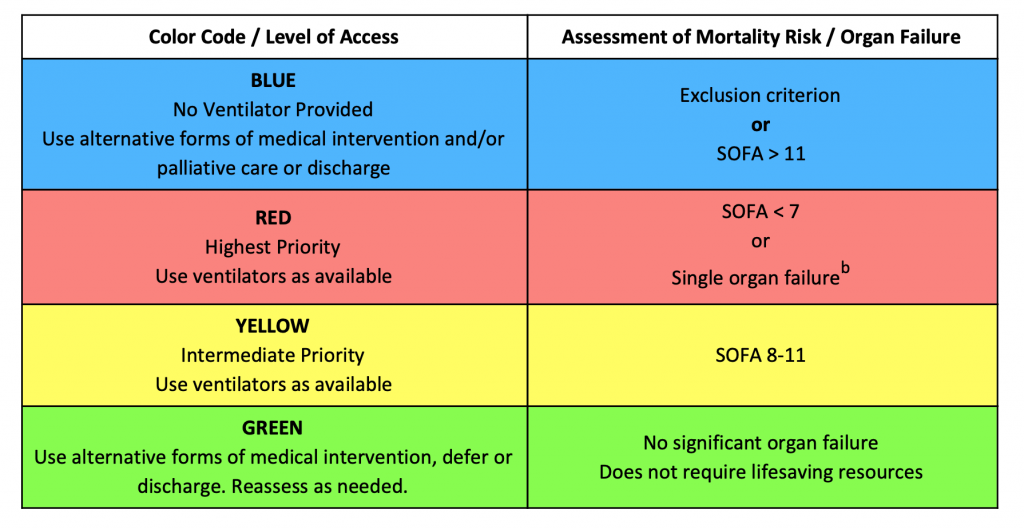 May be freely edited and used without attribution

I’ve been getting a lot of questions. Below are points of clarification and explanation, most of this is just my opinion.

Yes you can use the protocol however you want, you do not need to ask me or provide any attribution. If you’re developing a protocol, you should read the original New York State 2015 guideline, there’s also a brief Hopkins paper, a Washington State guideline, a Henry Ford guideline created specifically for COVID19, and a CHEST consensus statement.

Do everything feasible to not have to use an allocation protocol: reduce the burden of disease and increase capacity. Find vents in unusual locations (we’ve engaged our community where there are many thousands of unused vents from homebound ventilated patients who have died), 2 to 4 patients can share vents, look in every closet, decommissioned respiratory units, decommissioned hospitals.

Goal is saving the most lives, in accordance with important societal values such as protecting vulnerable populations. You want to provide ventilator therapy to patients who are most likely to have their life saved by ventilator therapy, and remove ventilator therapy from patients who are unlikely to have their life saved by ventilatory therapy. In our minds we think about this problem as choosing among patients who will clearly die if they don’t get on a vent, but it’s important to remember that in this pandemic there has been a STRONG push to intubate early, that alternative forms of support don’t work and are more likely to aerosolize the virus so we should intubate early, and that is a big problem, from a scarce resources perspective because if ventilator therapy is a scarce resource, every patient who would fly off the vent that you intubate leads to another patient dying because they couldn’t get the vent they needed. Early reflection on the Italian response (by the Italians) suggests that they intubated too many patients too early and I’m concerned we’ll do the same. At the moment we are pushing HFNC under surgical mask, as the initial approach to COVID patients who need support; 30 lpm, FiO2 30%, titrate up until sat falls below 93% on maximal high flow support, then move forward with intubation. Is that the right approach? I don’t know. But last week, when we were in intubate early mode, we intubated 7 patients in one shift and that is clearly not sustainable.

You need vents, beds, and people trained to provide critical care. As a routine, in normal times we operate near capacity on all three, especially beds. There are of course other critical supplies in addition to ventilators, like PPE, oxygen. Per the NYS document, estimated 9000 ventilators in NYS, 10% suitable only for peds. Normal hospital utilization rate is 85%, so the vast majority of the 9000 vents are being used. The NYSTF calculated that in a severe influenza pandemic, about 19000 patients would require ventilators simultaneously, resulting in a shortfall of over 15,000 ventilators.

The ventilator triage committee must know the status of ventilators and critical care availability in the hospital moment to moment. We receive two reports per day. Patient’s attending provides clinical data to the triage committee, who determines that patient’s priority status based on the clinical data. Before the patient has been triaged, the committee should not be in contact with the patients, and in fact really they shouldn’t know the names of the patients being triaged. The triage committee should be identified well before they are needed, and the usual model would be that there is a single triage officer on duty at any given time, and that duty rotates among members of the committee. Since the triage decisions are entirely clinical, non-clinical members of the hospital staff or community don’t need to be on it, but how a hospital staffs its committee is a local decision.

Three steps: 1. Apply exclusion criteria 2. Assess mortality risk 3. For intubated patients, perform protocolized interval reassessments (48h, 120h, and every subsequent 48h). The original document stipulates that based on the observed characteristics of a particular pandemic, 48 and 120h may not be an appropriate interval, and the intervals should be adjusted based on what is observed for a specific syndrome, so for example if we find that COVID patients all have high SOFA scores for 10 days and then recover, we should push the intervals out, and if we find that all patients who are doing poorly at 72h end up succumbing to the disease, we should pull the intervals in.  Also if a patient develops an exclusion criterion at any point, such as a cardiac arrest or a change in goals of care, ventilator therapy should be removed at that point, you don’t wait for the next protocolized interval reassessment.

Age was rejected by the NYS task force as discriminatory – age of course indirectly contributes to exclusionary criteria and SOFA scores. The exception is children, based on strong societal preference. 17 and under are favored. The Hopkins protocol does use age or what they call life cycle considerations as a secondary criterion.

If you stipulate that being subject to the protocol is dependent on diagnosis, you will change diagnoses. Diagnoses often aren’t clear. Although all patients needing a ventilator are subject to the allocation protocol, I think an exception should be made for patients who are thought to require intubation temporarily for unrelated reasons, e.g. someone who has perforated diverticulitis may need to be intubated for the surgery, but should probably be exempted from the protocol.

SOFA is used as a proxy for mortality risk. Some experts disagree with this, suggesting that SOFA performs poorly as a mortality predictor in primary lung disease. SOFA score has limitations – does not predict mortality nearly as well in ILI compared to sepsis. GCS component difficult to evaluate in intubated/sedated patients, uses outdated hypotension criteria (dopamine, dobutamine). Much better would be a disease-specific predictor of short-term mortality, which, for COVID, we may soon have.

You want to start classifying patients as blue red yellow green somewhat before you run out of ventilators–you don’t have to act on exclusion criteria until you run out, but if you start early, you will know exactly who is removed from ventilator therapy when you do run out. If you wait until you actually run out, it’ll be a mess. And what that means is that you have to stratify every patient in the hospital on a vent as blue red yellow green, which in many centers will take a while, before you run out.

Should family members be allowed to bag indefinitely? It’s an interesting question, the NYS task force“discouraged it” and I do too, because I think it places a burden on the family that most would prefer to not have, though that’s very paternalistic. Also, it places a burden on the facility, compromising the care of others. Who takes over when the family has to pee? Or when they pass out? Should we allow teams of family members to be at bedside, bagging, exposing them to all the sick patients on the ward, potentially making patients out of them? These family members will contract the illness and transmit it. But I can see counter-arguments. See page 70 of the source document.

Regional command centers seem crucial, so that resources like beds and ventilators can be shifted from places of surplus to places of shortage, and patients can be transferred to facilities that have capacity.

Withholding or withdrawing a life-sustaining therapy without the consent of patient or proxy is a profound, devastating decision that will severely affect some healthcare workers, and these consequences, along with the possible legal ramifications of these decisions, are partly why it is essential that they are undertaken according to an established protocol, ideally a protocol that is as objective as feasible. NEJM perspective piece suggests you can’t withdraw care; they suggest that withdrawing care has been determined to be illegal and will harm healthcare workers, and both of those things are true but I don’t see how that absolves us of our mandate to ethically allocate resources during a disaster. Disallowing withdrawal of ventilator therapy installs a first come first served system that is in my view profoundly unethical, it’s not hard to imagine huge numbers of patients on vents for weeks or months who have little to no chance of recovery.

There are all sorts of special categories of people that seem to have justification for being favored or disfavored in a policy: the elderly, pregnant patients, parents, prisoners, undocumented immigrants, community leaders, there’s no end to it and I agree with the task force that a triage system based on clinical features alone is the most sound.

The New York State guideline did not use functional status as an exclusion criterion to avoid judgments around quality of life. I am comfortable with such judgments though, especially when they include an objective criterion, which is why I included the ECOG scale criterion (I used ECOG score of 4, some might say it should be 3). However, these criterial (e.g. metastatic cancer, which I suggest as a criterion for poor prognosis and exclusion), are open to challenge. There are more explicit criteria listed in the Hopkins document, under Table 1.  You may not know if a patient has very poor functional status at the outset of care, but it’s reasonable in my opinion to assume it if the patient has, for example, bedsores.

If a patient is intubated prior to the discovery of an exclusion criterion, ventilator therapy should be removed as soon as an exclusion criterion is known. It is reasonable to intubate DNR patients in a non-shortage, but not, in my opinion, in a shortage, though this stipulation is also open to challenge and diverges with the NYS guideline.

Comparing patients within class evokes a “war of all against all,” one of the key features of the system is that within a class, triage is made by randomization (i.e. a lottery). I think this is a very strong feature of the system. Trying to further clinically differentiate among red patients using an objective system I think would be very difficult and open to interpretation/exploitation/gaming. First come first served favors the rich/educated/empowered.

When the need for a vent is identified, are there vents available right now? If no, classify patient. If red, that patient is added to the pool of reds and as soon as a vent becomes available (because a red vented patient has been reclassified or died) all reds are randomized to that vent.

Keeping the public informed on the possible need for removal of ventilation, and ongoing data collection, are essential. Relatives must be informed that all ventilator therapy during a shortage is a trial of therapy that may be discontinued if it does not result in clinical improvement at a pre-specified pace. Seattle Tough Conversations Document.

Hopkins group suggests the triage officer (with other administrators in tow) tell the family about allocation decisions. I think it should be both–triage officer, attending, and possibly others (high ranking hospital official such as the CMO or CNO, pastoral care, ethics committee liaison).

If a chronically vented patient comes in with their own ventilator it seems appropriate to me to exclude them from the protocol.

ED must know when no vents are available, so that ETI is avoided. If a patient comes in intubated (without their own ventilator) and there are no vents available, and all vented patients are red priority, the newly intubated patient should be extubated. If there is a lower priority patient (i.e. a blue/yellow patient already intubated), that patient should be extubated while the new patient is bagged. If uncertain at any given moment, err on the side of ETI and bagging, until the situation can be more comprehensively assessed. Extubating is logistically/emotionally harder but ethically identical to not intubating.