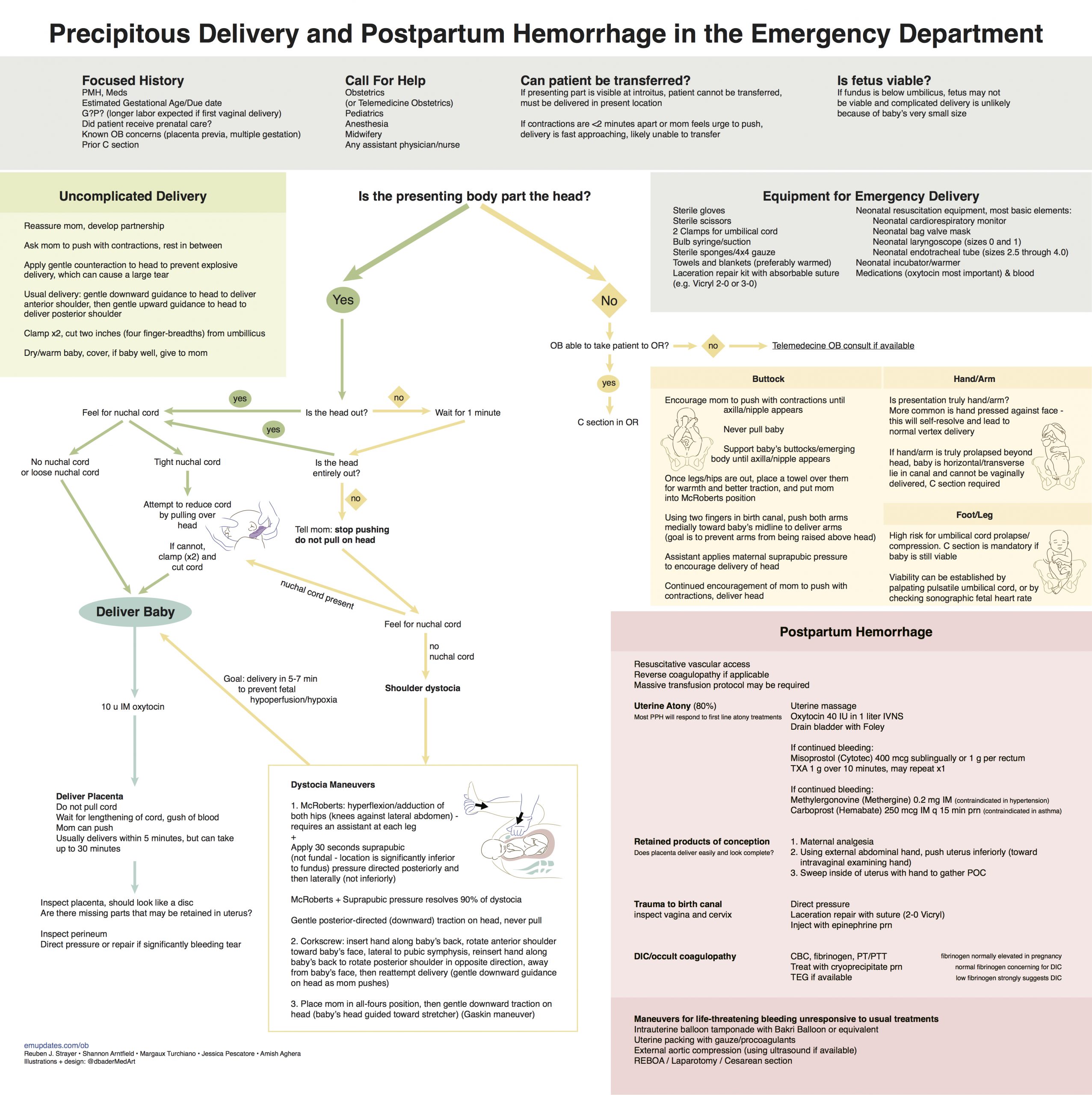 Pregnancy termination is now very difficult to get in many regions. The abortion pill–medication abortion–is one dose of the antiprogesterone mifepristone followed by one or more doses of the prostaglandin misoprostol. The therapy is well studied and unequivocally safe and effective up to 10 weeks gestation.

For women who have access to both medication and surgical abortion, there are plusses and minuses to each but the main difference is that a surgical abortion is a brief procedure requiring anesthesia and uterine instrumentation, whereas a medication abortion occurs over several days in the patient’s home.

But medication abortion allows women without access to surgical abortion to  safely terminate pregnancy. In the US, federally authorized abortion pills are highly restricted for reasons that are political, not medical. So a network of activists have developed robust programs for getting this treatment into the hands of women who need it.

The role of emergency providers in managing women who request elective termination of pregnancy depends on the resources available in your community, but all of us need to know about medication abortion, if for no other reason than it is a rising therapy and you’re going to get asked. Especially if you practice in an area where surgical abortion is poorly available or unavailable, familiarize yourself with the relevant options so you can properly counsel appropriate patients. This is another way that emergency clinicians stretch the scope of their practice to meet the changing needs of the patients they serve.

The second perimortem C-section of my career happened last week. The first was almost ten years ago. While I’m hardly an expert (takes three to be an expert), I have some pointers worth sharing.

The first case happened on the first day of my first job, in Houston, having just completed my ultrasound fellowship in New York. The night started with a guy shot in the right chest: intubation and chest tube. His girlfriend was brought in next, pregnant, shot in the head: perimortem c-section and neonatal intubation.

The second was just the other day. It was my first code at my new job at a small hospital in Wellington, New Zealand. A young girl hanged herself, was found by family who called EMS. They found in her VFib, defibrillated, started CPR, intubated and called to warn us of her arrival. They reported she was in asystole, a bad sign for mom. They reported she was 22 weeks pregnant, a bad sign for baby.

There have been a few PMCS reviews circulating recently in the EM world and I agree with most of their recommendations. But I have differing thoughts on a few points.

Do not memorize the number 24. Or 23. Or 25, or whatever the gestational age your neonatologists say they can currently save premies. You are unlikely to know the precise age–the mother is generally the most reliable source for this information, but generally not in this circumstance. We understood the hanged woman to be 22-weeks pregnant; post-mortem estimates placed the baby at 26 weeks. More importantly, you are not doing this procedure for the baby: PMCS is a resuscitative intervention for the mother. You’re trying to save mom, first and foremost, and then baby, maybe. So, whether the gestational age is 22, 24, or 26 weeks is irrelevant.

But you don’t want to do this procedure for a first-trimester pregnancy, so when do you do it?

Do not memorize the number 4. This is the supposed number of minutes after maternal arrest when we see a precipitous decline in fetal neurologic outcome and survival. The number 4 is even more irrelevant than the number 24, because, again, the procedure is done primarily for the mother. And the procedure is done as soon as possible. As soon as possible is the only time consideration.

So what is most important to know? There are two things you must do and a few nuances to keep in mind.

Assuming you have some forewarning, the two things you must do are GET HELP and GET STUFF.

Call the obstetrician.  Call the NICU, or PICU, or whomever can help you take care of the baby.

Get stuff for mom. Get a kit. You may only have a thoracotomy kit or some other all purpose ED kit – get it. If you don’t have a kit, get a scalpel, real surgical scissors, towels, and clamps for the cord.

Assign someone to manually displace the uterus to the left. Tell this person she must do this nonstop until the scalpel hits the skin. And then she must immediately shift focus to assure CPR continues until all efforts cease. There will be others responsible for CPR, ideally a line of people performing CPR, but it’s easy to neglect once scalpel hits skin, and so it is important to have someone assigned as insurance just at the moment when this oversight is most likely to occur.

Forget the mommy-tilting ramp. It will be hard to find the ramp, harder to jerry-rig one, and harder still to perform CPR and the procedure on a tilt. Assign a tummy-pusher.

The patient will arrive, and if she’s arrested you will have to secure the airway, perform CPR, obtain IO or IV access, give drugs, possibly defibrillate. This will seem simple because you do it all the time.

And then you will have to perform the perimortem C-section. Perhaps an obstetrician has by now arrived. If not, two thoughts might cross your mind: there’s very little to gain and I’m not going to be a hero. Erase both of those thoughts; there’s even less to lose and it’s time to be a hero.

Cut a vertical incision from the top of the belly’s curve to the pubis. With an earlier pregnancy and heftier mother, there may be fat to get through to the peritoneal wall – you can use your fingers as claws to bluntly dissect a parting to the peritoneum. Then cut through the peritoneum vertically, ideally with scissors (you can use the scalpel to initiate an opening inferiorly). Pull out the big uterus and cut it open vertically in the same manner until you get the baby out. Be careful not to cut the baby.

When the baby comes out it will be very alarming. If it is very premature, it will look like a purple alien. The first time I saw this it was disturbing. The second time I was quite aware how disturbing it was for everyone else in the room. The cord will have to be clamped twice and cut in between. Grab the baby, wrap it in a warm towel, bring it to the warmer you have prepared. Most likely you will immediately start bagging the neonate, unless it is near-term and crying. Look for signs of life such as attempts to breathe, cry or move. Both times for me there have been none. If there is no heartbeat or signs of life, start CPR. To determine if there is a heartbeat, listen with your stethoscope over the chest or feel for umbilical pulsations. If there is a heartbeat and it is slow (<60 bpm) just bag the baby, if it doesn’t improve quickly (30 seconds) start CPR. If the eyelids are fused it is probably too premature to be viable. If the baby is an early premie and bagging and CPR do not resuscitate the child I would stop efforts. If it is a full or near-term baby that cannot be resuscitated by bagging and compressions, intubate, obtain IO/UV access and start in with epinephrine and advanced neonatal life support.

Once more: the delivery is a resuscitative intervention for the mother first and foremost. Make sure maternal CPR and resuscitation continue throughout and after delivery. Don’t let the splayed open belly and uterus concern you, just pack them with towels, it will bleed less than you anticipate. Mom is likely young and healthy. After a few minutes our mother had a strong pulse and a good blood pressure. She is alive in the ICU as of this writing.

Despite having read this and feeling prepared, expect a shit storm. The unique scenario of your case will bring unanticipated events. Get help and get stuff (mommy and baby stuff) early. Assign the tummy-pusher-turned-CPR-advocate. Cut the tummy, cut the uterus, cut the cord. Expect to bag the baby and perform compressions unless near term and breathing. Continue efforts with mom until after the procedure.

Finally, I would like to comment on a dramatic difference between the Houston and New Zealand experiences. Following the case in New Zealand, there have so far been two debriefing sessions. Both have been held to address the clinical and emotional aspects of such a difficult case. In Houston, ten minutes after PMCS we moved on to the next case, another critically injured patient, and that was that. Everybody involved in the New Zealand case was invited to the second debriefing session, from the ambulance crew to the students to the doctors and nurses from the ED, obstetrics and the ICU. A psychologist ran the session, and though I was skeptical, she was quite good. Was very interesting to hear how students, pregnant nurses, old cranky doctors and everyone in between felt about the experience. It was just as important to air out clinical concerns and perspectives unique to each specialty, to avoid frustrations and move closer to optimal care for next time. I suggest you try to make this happen for the next once-in-a-lifetime case you experience.

A correspondence from New Zealand

From Rose 2015 as summarized by Cabrera 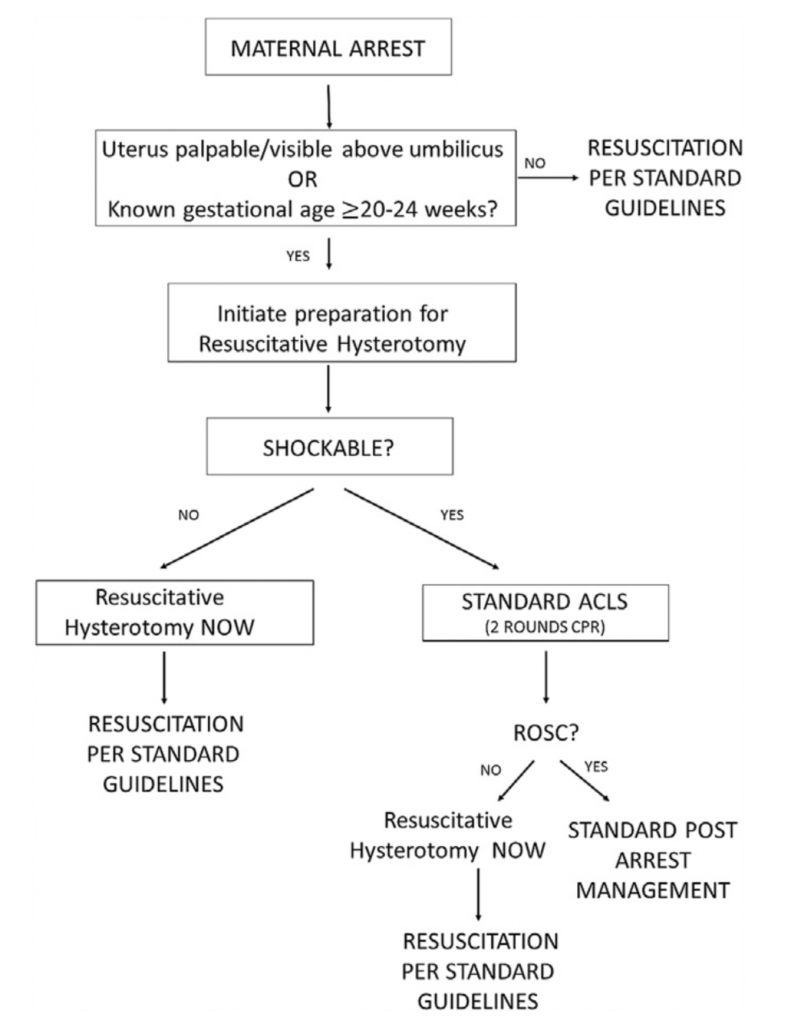